NOT long after England’s glorious semi-final run at the 2018 World Cup, Gareth Southgate bumped into Neil Warnock at a dinner.

Though the Three Lions agonisingly lost in the last four to Croatia, the performances in Russia that summer had lifted the country’s spirits.

Millions of fans had fallen back in love with the national team after being burned by the Roy Hodgson debacles at the previous two tournaments.

But Southgate was soon given a not-too-subtle reminder of how big a gamble it had been by the FA to appoint him given his relative Prem inexperience.

And trust the outspoken ex-Sheffield United and Middlesbrough boss not to sugarcoat the feeling of a sceptical public.

Southgate recalled: “When I took the job, I know people would have feared the worst. 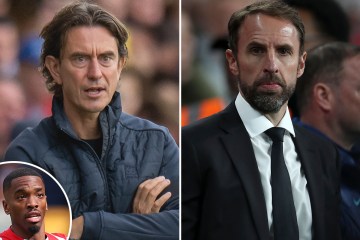 “Really? What has he done? Got Middlesbrough relegated. Done a bit with the U21s.

“Some shrugged their shoulders. Well, he knows the young players. We’ve tried everything else, we might as well give this bloody thing a go.

“If you want a frank opinion on things, I always find that Neil Warnock never disappoints.

How footballers look as the opposite gender featuring Ronaldo and Williamson

It is an anecdote that underlines Southgate’s humility.

Whatever happens in Qatar next month — and some may have the same trepidation as four years ago given recent results — Southgate will go down in history as one of England’s greatest managers.

And it was apparent on Monday night in London just how much Southgate values the prestigious position.

It was gone 11pm when Southgate finally took to the stage after agreeing to help out to raise funds for charity.

He even auctioned off his Hublot watch from the last World Cup for £15,000.

And then in an eloquent, emotional speech — in which he referenced English novelist Rudyard Kipling — he explained why managing England “is the greatest privilege”.

Southgate spoke about “running home from school” to see Bryan Robson score after 27 seconds against France at the 1982 World Cup.

The night he stayed up late to watch Gary Lineker’s hat-trick against Poland at Mexico 1986.

How he jumped for joy when David Platt scored that volley against Belgium in 1990.

Then there was the pride he felt when, aged 25, he won his first of 57 England caps as  a sub against Portugal at Wembley in December 1995.

How humbled he was to “stand as one of 11 representatives of 55 million, belting out the national anthem”.

My way or the high way

Southgate — who will join Walter Winterbottom, Alf Ramsey, Bobby Robson and Sven-Goran Eriksson in managing England at more than one World Cup —  plans to do it his way, regardless of outside noise.

He said: “To accomplish extraordinary things is difficult.

“This is a job where every decision and selection is questioned, debated, ridiculed. That’s just my postman by the way!

“But I’ve to be strong enough to withstand popular appeal.

“And do what I really believe gives us the best chance to win. That doubting, that noise that surrounds us is because people care. They just want to win.

“I understand that. If nobody cared or commented then it wouldn’t be the incredible challenge that it is.”

Southgate explained what it is like to be England’s manager.

He told the audience: “If the story seems a mix of emotions, successes and failures that is because it has been.

“For every amazing night when you walk on air, there’s the gut-wrenching feeling the morning after a loss.

“Those moments when you have pick yourself up off the canvas.”

We won £3.2m in postcode lottery – all our neighbours are booking holidays

Southgate then quoted Kipling’s poem If . . .

“If you can force your heart and nerve and sinew to serve your turn long after they have gone, and so hold on when there is nothing in you, except the will which says to them ‘hold on’ . . . ”

To donate to the Nordoff Robbins Music Therapy Charity, go to nordoff-robbins.org.uk